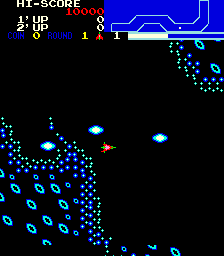 Vanguard is a scrolling space shooter (some levels are horizontal, some are diagonal, and some are vertical). Shoot down enemies with your laser. Keep a close eye on your ever decreasing fuel gauge, luckily each enemy that you destroy will add to your remaining fuel. Find the energy pods to be temporarily invulnerable; the energy pods will also increase your fuel level. At the end of each level you must defeat a boss that is guarded by two moving force fields with holes in them. The computer will announce the name of the each zone using some nifty early 80's synthesized speech. The different levels include Mountain Zone, Rainbow Zone, Styx Zone, Rainbow Zone 2, Stripe Zone, Rainbow Zone 3, Bleak Zone, and the City of Mystery. 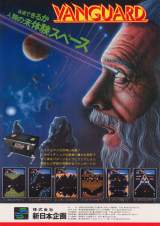