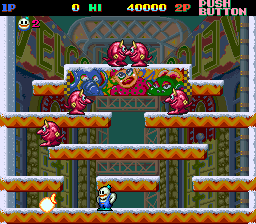 One or two players take on the roles of snowmen Nick and Tom as they battle a variety of monsters over fifty platform-based, single screen levels.

The snowmen can throw snowballs at the enemies with the aim of encasing them completely in snow. The encased enemies can then be kicked in order to destroy them and this is achieved by standing next to the snowball and pressing the "kick out" button. This sends the giant snowball flying around the screen, killing any enemies that lay in its path.

If players take too much time to complete a stage, an evil pumpkin head will appear and try to kill them. The pumpkin is invincible but can be stunned with snowballs. After a short time the evil pumpkin will spawn ghosts that can travel freely around the stage as they seek out Nick and Tom. These ghosts can't be killed or stunned, so the player's only hope is to avoid them while eliminating the remaining standard enemies, to move on to the next screen as soon as possible.

When players defeat an enemy, it may drop a coloured potion bottle. These can be picked up and act as power-ups:
* Yellow = Long shot
* Red = Speed up
* Blue = Bigger snowballs (encases monsters quicker)
* Green = Inflates the players like a balloon and lets them fly around the screen, killing any monsters they touch.

Every 10th level features a battle with a large end-of-level boss.

Like Taito's "Liquid Kids", Snow Bros. was licensed to Manchester's Ocean Software for conversion to both the Atari ST and the Commodore Amiga home computers but, again like "Liquid Kids", Ocean decided that the game wouldn't perform well at retail and the game was cancelled. It has since been released, in its entirety, to the emulation community and is a fine conversion.

This game was released as a conversion kit only (often factory installed in a generic cabinet), so any such machine could be converted into a proper Snow Bros. machine. This title is JAMMA compatible (the circuit board for it is one of the smallest ever made, it is barely larger than a Nintendo Famicom cartridge). The marquee for this title shows a 'Snow Bros.' logo, with two snowmen, and a couple of cartoon enemies in the background - in keeping with the game's 'cute' theme.

A bootleg of this game is known as "The Winter Bobble".

* Killing all the monsters on a level with a single snowball causes money bonuses, worth 10,000 points, to fall down, but sometimes a glowing cake bonus will appear instead. When the cake is collected, the game stops and four blue snowball creatures appear for a short time. If these enemies are killed, they each provide a letter : S,N,O or W. Collect all four of these letters for an extra life. The glowing cake can also appear at other times during the game.