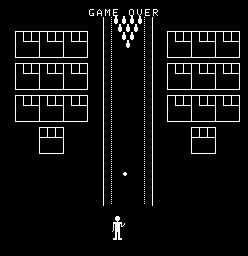 You have a top down view of a bowling alley with score cards shown on each side. The only thing in the game that uses an actual animation is the bowler himself, the robot has a several frame animation when he walks. Everything is (of course) shown in glorious monochrome black and white. The game begins with your robot bowler running up to the alley (his feet move faster than he does, which makes it look like he is running on a conveyor belt or something). You then have three seconds to roll the ball, before it will roll of its own accord. The game is controlled with five buttons, they are left, right, shoot, hook left, and hook right. When Exidy was making this game, they had to make a decision about how the hooking worked, and it seems that they decided that "Robots are telepaths, and can effect the balls movement after it is thrown!". You see you can't even hook the ball until after it is thrown. This makes it very easy to pick up the spare. The game makes up for that little trick by making 'splits' very common (the 7-10 split and the 4-7-10 split come up all the time). These are pretty annoying, but you can usually learn how to clear them out (except the 7-10 split, I still haven't figured out how to clear that one). 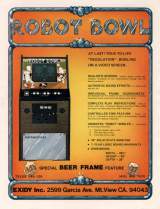