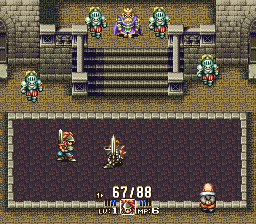 Set in a high fantasy world, the game follows three heroes as they attempt to claim the legendary Mana Sword and prevent the Benevodons from being unleashed and destroying the world. It features three lengthy main plotlines and six different possible main characters, each with their own storylines, and allows two players to play simultaneously. Trials of Mana builds on the gameplay of its predecessor with multiple enhancements, including the use of a time progression system with transitions from day to night and weekday to weekday in game time, and a wide range of character classes to choose from, which provides each character with an exclusive set of skills and status progression.

The game has similar gameplay to its predecessor, Seiken Densetsu. Like many other role-playing games of the 16-bit era, the game displays a top-down perspective, in which the three player characters navigate the terrain and fight off hostile creatures. Control may be passed between each of the characters at any time; the companions not currently selected are controlled by artificial intelligence. The game may be played simultaneously by two players, as opposed to the three of Seiken Densetsu 2. There are six possible player characters. At the beginning of the game, the player chooses which three of them will be playable and which one they will start with; the other two playable characters will join the party when met. The remaining three characters act as non-playable characters (NPCs) when encountered.

Each character can use one type of weapon, in addition to magical spells. The effectiveness of spells depends on the magical ability of the character and the element of the spell in relation to the enemy. When in battle mode, attacking monsters fills a gauge that allows the player to use character-specific special attacks. Upon collecting enough experience points in battle, each character can increase in level to gain improved character statistics such as strength and evasion. Options such as changing equipment, casting spells, or checking status are performed by cycling through the game's Ring Commands—a circular menu which hovers over the controlled party member. The game is paused whenever the Ring Command menu is activated. Within the Ring, the player has nine slots for storing items; additional items can be placed into item storage, which is inaccessible in combat.

Character level progression is coordinated by the player, as a choice is given as to which statistic to raise by a point at every level up. A class system is also present. Once a character reaches level 18, the player can visit one of several Mana Stones located throughout the game and choose to upgrade them to one of two classes for each character—either a class aligned to Light or a class aligned to Dark—which provides a different set of skills and different improvements to character statistics. A second class change may be optionally performed at level 38, again split between a light and a dark choice, if the player has obtained a required rare item for the target class. The class changes do not affect the plot of the game, only gameplay.

The game also employs a calendar function into its gameplay. A week cycles much more quickly than an actual one, with a day passing in a matter of minutes. Each day of the week is represented by a different elemental spirit. On that spirit's day, magic of that element will be slightly stronger. An in-game day is also divided into day and night. Certain events only happen during certain times of day, such as a nighttime-only black market selling particularly rare items. Enemies encountered in the field also change during certain time periods, and some may be sleeping if the characters approach them at night. In addition, the character Kevin transforms into a werewolf when he fights at night, greatly increasing his attack power. Using an inn's services allows the player to skip the game's clock to that day's evening, or the following morning. 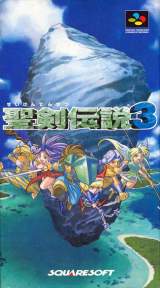