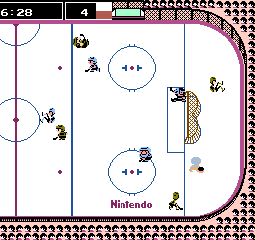 It's fast skatin', hip checkin', high scoring action. Lead your team into center ice, over the opponent's blue line. Pass over to the point and set up for the tip in - Score! Choose a country for you and your opponent, select a level of play and face off at center ice to become the top goal scorer in Nintendo's Ice Hockey! Get charged with a penalty and test your defense. Or attack on a power play and use your puck handling skills to catch your opponents off guard. Either way, you can become a superstar in the league of Nintendo Ice Hockey!