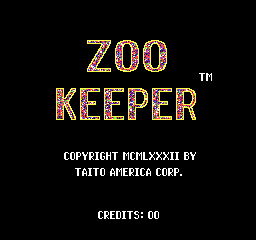 Zoo Keeper is a superb, fast-paced arcade game in which the player takes control of Zeke the zookeeper. Many of the animals at Zeke's zoo are running wild and have captured Zeke's girlfriend, Zelda. Zeke must recapture as many animals as possible and rescue his sweetheart from the animals' clutches.

Zoo Keeper features two different, alternating play fields, with each level having its own task to complete; as well as a final 'bonus screen'. The three levels are as follows :

On the first play field, players must move Zeke around the outside of an animal enclosure, constantly re-building the enclosure wall that the animals are set on destroying. Any wild animals that are loose must be jumped over or the player will lose a life. The level's timer is represented as a fizzing fuse, and along this fuse are a number of bonus items such as beer or a net for catching escaped animals. When the timer's fuse reaches an item, it will appear on screen and can be picked up. Once the timer makes it to the word 'End', the current level is completed and play moves on to the next level. The bonus items that occasionally appear include mugs of beer, ice cream sundaes, clover clubs, watermelons, etc.

If Zeke manages to pick up a net, he will be able to capture the animals and put them back into the Zoo. The net will eventually disappear and the captured animals will try to escape once more by breaking through the enclosure wall. Zeke will have to continue building the wall around the Zoo until the time is up. At the end of the level, bonus points are awarded for every animal inside the wall. Animals found on this level are snakes, moose, camels, rhinos, elephants, and a lion.

On the second, more difficult play field, Zelda is tied to a palm tree and Zeke must rescue her by jumping to the top of the screen via a series of moving platforms; dodging the coconuts thrown by a mischievous monkey. On each of the platforms, various foods and drinks can collected to earn extra points. Sometimes, one of the ledges will have a 'Free Game' sign that will grant the player a free credit. While Zelda is tied up, she says 'save me', and whenever Zeke gets knocked out by one of the deadly coconuts, she says 'Oh, no!' If Zeke makes it all the way to the top and rescues her, she says 'My Hero' and a bonus of 5,000 points is awarded.

The first and second screens are alternated before the player finally reaches the third and final 'bonus screen'. Here, Zeke must jump over the herds of charging animals that are running from a cage at the foot of an escalator. Zeke must reach the escalator behind the animals' cage and make his way up to the next floor, where a second escalator - replete with more charging animals - awaits. Zeke must reach the top of the second escalator to rescue the trapped Zelda.

After Zeke has rescued Zelda on the final screen, the game begins again with an increased level of difficulty.