Fourth installment in the Zelda no Densetsu series and the first for a handheld game console. 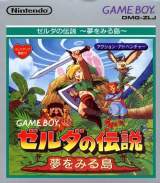