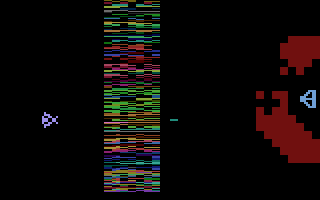 The primary objective of the game is to break a path through the shield, and destroy the Qotile with a blast from the Zorlon Cannon. The secondary objective is to score as many points as possible.

GAME 0 - This is the simplest version, a good choice for young children to play. It features a slow Destroyer Missile.

GAME 2 - This is the 'normal' game, with two alternating Shield configurations, plus a Destroyer Missile, and a Swirl travelling at normal speed.

GAME 4 - This game features a Zorlon Cannon that bounces off the shield. (Watch out! It can destroy you on its return flight.) There are two alternating Shield configurations, plus a Destroyer Missile and a Swirl travelling at normal speeds.

ULTIMATE YARS: GAMES 6 and 7 - Ultimate Yars features a bouncing Zorlon Cannon, plus some unusual twists that distinguish it from the other Yar games.

First, you must bounce the Yar against the left side of the screen to make the Zorlon Cannon appear. Also, to make the cannon appear, you need five TRONS. TRONS are units of energy which you can collect at the following rate:
1. Eat a cell from the shield: 1 TRON
2. Touch the Qotile: 2 TRONS
3. Catch a Zorlon Cannon shot after it bounces off the shield: 4 TRONS

If a Yar bounces of the left side with less than five TRONS, it will not get a shot, but it won't lose the TRONS it has, either. (Each time a Yar is destroyed, it loses its TRONS). Each Yar has a capacity of 255 TRONS. If a Yar tries to take on more than that, it will short out and the Yar will lose all its TRONS. The count of TRONS is not displayed on the screen. Yar scouts understand the count instinctively.

GAME 6 is the 1-player version of ULTIMATE YARS.

GAME 7 is the 2-player version.