X-Men - Children of the Atom [Green Board] 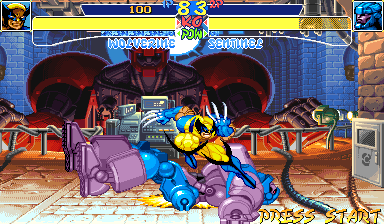 X-Men: Children of the Atom is a one-on-one fighting game based around the Marvel comics characters. Released around the time of the mid-1990s X-Men animated series of the same name, the game's plot is based on the "Fatal Attractions" story arc from the comics as players control one of the X-Men or their enemies in their fight against the villain Magneto.

Players can choose between one of six X-Men members or four of their enemies (for a total of ten selectable characters) and proceed to compete in a series of best-two-out-of-three bouts, before battling Juggernaut and then Magneto himself.

The player has an X-Power gauge (similar to the Super Combo gauge in "Super Street Fighter II Turbo" and the Special gauge in "Darkstalkers") that builds as the player performs regular or special moves. X-Power gauge starts at Level 1 and reaches Level 2 when it becomes half-full, at which point an Aura will begin to surround the player's character until it becomes full and reaches MAX level. Players can then perform an "X-Ability", which consumes a small portion of the X-Power gauge, or a "Hyper X", which consumes a greater portion of the same gauge. Breaking one's fall from a throw or performing a counter-throw will also consume a portion of the X-Power gauge when performed.

After selecting a character, the player can choose between manual or automatic blocking. By selecting to automatically block attacks, some features will not be available during gameplay. 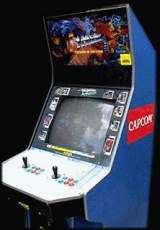 Click to enlarge
(members only)
Runs on the "CP System II" hardware.
Green Board [Japan]

X-Men COTA was released in December 1994 in the Japanese arcades. It was known there as the 8th video game released for the CPS2 hardware.

A special 'Rent' version is known to exists as "X-Men - Children of the Atom [Yellow Board]".

It is the first fighting game produced by Capcom using characters under license from Marvel Comics, widely praised for its faithfulness in capturing the spirit of its namesake comics, by using colorful animation and voice actors (see Staff section for more information) from the 'X-Men' animated series.

The game, along with SSFII Turbo, is considered as one of the first fighting games to popularize the now often-used ideas of 'Super Jumps', 'Super Combos', and 'Tech. Hit', which meant that an attempted grab or throw had been negated by the opponent. Furthermore, the game was the precursor to the Capcom 'Vs. series', with elements and characters from this game having been combined with "Street Fighter Alpha - Warriors' Dreams" to create "X-Men vs. Street Fighter".

* Play as Juggernaut (Player 1 and 2) : Input Akuma code, then after the battle press Up/Left TWICE and you should see Juggernaut's face.

* Play against Akuma : You must use 'manual block' and win every match without continuing. Defeat your opponents two rounds in a row (don't lose a round), having 'first attack' on each round. You must also win the final round of each battle with your Hyper-X.