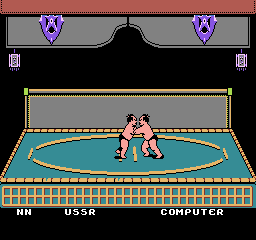 Get ready - get set - get psyched! The World Games are here! And you're a star athlete in this awesome international competition! Go for the gold as you challenge the world's best athletes on their home turf!

Leap from the treacherous cliffs of Acapulico. Go stomach-to-stomach with a 400-pound Japanese sumo wrestler. Jump barrels on an icy lake in Germany. And pump heavy iron in the Soviet Union.

Travel to Scotland for the amazing caber toss! Then to Canada for frantic footwork with log rolling lumberjacks. Ski the slalom on the snow-covered French Alps. And ride the meanest, orneriest bull in the U.S.A.!