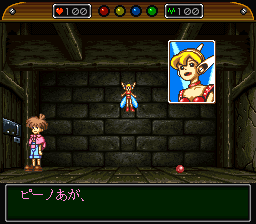 Wonder Project J is an action/simulation/adventure game developed by Almanic and published by Enix, but it is also a game like no other that doesn't really fit neatly in any defined genres. The story takes place on Koruro island (Corlo island), a place where androids and humans live in peace - or at least, they used to. Their relationship has been plagued by hostility and mistrust, and a bitter feud has been growing between the two sides. The game begins as Dr Gepetto, a gifted craftsman, puts the last touches on his latest creation - an articulated Gijin (an android) child named P?no. But for unknown reasons, the scientist is arrested and thrown in jail and the poor P?no is left all by himself. The goal of the game is to help the little android boy and to teach him how to move around and explore his new world. Interestingly, the player doesn't directly control Pino, but instead uses an interface-robot called 'Tinker'. The cute flying fairy can attract Pino's attention, ask him to walk in one direction, or stop, or help him pick up and use objects. And Pino starts out as a really naive boy who needs to grow and learn a lot! The player literately has to train the robot child, encourage him to repeat actions over and over, or teach him what is right from wrong (by praising and scolding him). However, the core gameplay of Wonder Project J is a lot more subtle and Pino rarely knows how to respond to new stimuli, and will simply try to eat any object he sees for the first time. But, in the end, this long training will slowing develop his inate abilities (such as attack, defense but also confidence, honesty or kindness) and will eventually activate all seven circuits of his robotic heart (as well as the mysterious 'Circuit J'), and maybe help humans and robots live in peace and harmony. Wonder Project J consists of ten acts and is single player only.

nder Project J is undoubtly based on Carlo Collodi's classic novel the Adventures of Pinocchio originally published around 1883. However, Wonder Project J has many more parallels to Walt Disney's take on the tale. Pino, like Disney's Pinocchio, is a really appealing and innocent character helped by a secondary character who symbolizes his conscience (Disney's Jiminy Cricket certainly served as a base to design Tinker). The game has also obvious influences from Osamu Tezuka (Astro Boy) and Studio Ghibli/Hayao Miyazaki (Laputa,Totoro).