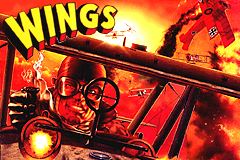 Wings combines arcade-style action (the strafing missions take place in an isometric 3-D perspective) with a first-person flight sim. Between missions, cinema scenes tell the story of the war as it progresses.

Wings is easy to pick up and pilot, and challenges players with over 100 increasingly difficult missions. You can fight through the entire Great War and build your pilot from a rookie to an ace.

You'll also be able to go head-to-head with up to four friends using the Game Boy Advance Link cable.