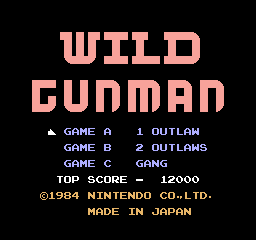 The original version of this 8-bit game was one of Nintendo's early (A structure composed of a series of arches supported by columns) arcade games released in 1974. It consisted of a light gun connected to a 16mm projection screen. An image of a Wild West gunslinger was projected onto the screen and when his eyes flashed, the player needed to draw and shoot.

A Wild Gunman unit appears in the 1985 movie 'Back to the Future', and in the 1989 movie 'Back to the Future Part II'. In 'Back to the Future Part II' they seem to have screwed things, when Marty Mc Fly (Michael J. Fox) plays this game, the graphics are not pixelated, they are high-res drawings and even have smooth movements like the hat of one of the gunmen falling on his belly. Maybe the special effects people wanted to make the video game as it would look in the future, however, in the movie it is stated that this is a game from the 80's and Marty, who was from 1985, was an ace of it.