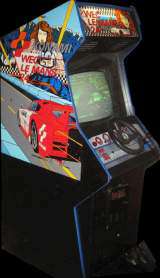 WEC Le Mans 24 was developed by Technostar/Coreland and Alpha Denshi. The hardware was developed and sold by Konami. After developing this video game, 'Technostar' was bought out by Coreland.

WEC Le Mans was released the same year as Sega's seminal "Out Run" and tends to be unfairly overlooked in the annuls of video game history. The sprite-scaling and use of color is superb with the game-play being tight and responsive - if a little on the difficult side. Le Mans asked rather more of the player than Out Run, adopting more of a 'simulation' approach to its game-play - but patient and skillful players found their efforts suitably rewarded.

The game forbids the initials 'SEX' on the high score table. If you try, it gets changed to 'HHH'.