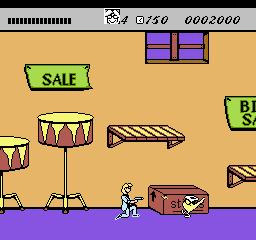 Are you ready for this? Number One of the Top Ten Most Bizarre Things to Happen This Year: Garth has been kidnapped! No way, you say? Hway!! It's the work of a most heinous goon - a pixelated purple putridosity called Zantar. And now you, Wayne Campbell, must heartily rescue your excellent sidekick from a fate most unbecoming!

Armed with you mighty guitar and the power to Schwing, you must brave the perils of Kramer's Music Store, Stan Mikita's Donut Shop, the Gaeworks nightclub and suburbia. There, you will spar with such dweeboids as monster bagpipes, accordions and kazoos (shyeah, rright!), spewing coffee cups and dangerous disco balls (as if!), hair-whipping headbangers and the strange Psycho Hose Beast (way!)

Released in November 1993 in the USA.