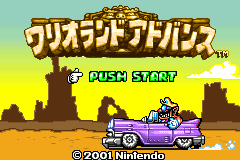 It's nice to know that in the fast-changing world of video games, some things never change. Take Mario's archrival. Wario looks great on the Game Boy Advance, but he's still the same money-mad rascal who has starred in some of the greatest hand-held platformers of all time.

This time around, a tale about a golden pyramid is enough to send the big blowhard scurrying off to the nearest jungle. Sure enough he finds the joint, but before he can collect his booty he'll have to undergo a brain- and body-bending series of challenges.

Four guardians stand jealous guard over the four passages of the pyramid. Each passage, in turn, features four levels. Emerald Passage transports you through jungles, lagoons and other troubles in tropical paradises. Ruby Passage's man-made levels include a sinister factory, a giant freezer and a huge pinball table.

The twilight world of Sapphire Passage will shiver your spine with a haunted hotel and a volcanic cavern that's always on the verge of eruption. Child's play in look but not in game play is Topaz Passage, where crayon-wielding enemies draw trouble and tumbling rows of dominoes threaten to squish Wario once and for all.

Wario's trademark transformations are not only good for laughs; they're also vital to success. Stung by a hornet, Wario puffs up and floats to hard-to-reach items. Fed an apple, Wario porks out and plunges through solid floors. Flaming Wario can burn through flammable blocks. Other zany transformations include bat, zombie and spring Wario. Boing!

In each level, Wario must collect a key that can open the passage's next level. Unearthing a CD in each level not only scores him big bucks, but the chance for rap master Wario to spin his new tune in the pyramid's Sound Room. Wario cannot face a passage's end boss until he collects all four Gem Pieces hidden in each level.

Adding even more tension is the timer that ends each level. When Wario lands on it, he has limited time to dash back to the entry point. In many levels, Gem Pieces and CDs can only be found after starting the timer. Extras in this way-deep game include minigames and videos starring wacky Wario impersonators.