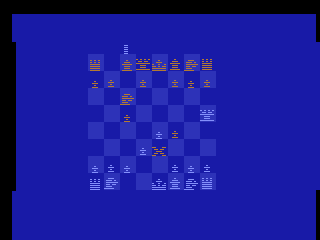 An early home chess game. The standard U. S. chess rules are used in this game. To move a piece, place the X on the board onto the piece to be moved then press the red button. Next, move the X to where you want the piece to go and press the button again. If the move is illegal, the 2600 will give a warning sound and not make the move.

Another maneuver is called en passant. This move is used to counteract the enemy pawn's initial double move on a adjacent square. To carry out the en passant, you must advance your pawn to the fifth rank. Your opponent then has the option of moving his or her pawn one square (where it would be under attack) or two squares. If you opponent elects to move two squares, the en passant move allows you to take that pawn by diagonally moving your pawn to the square that was skipped over.

Level 8 is a beginner level.