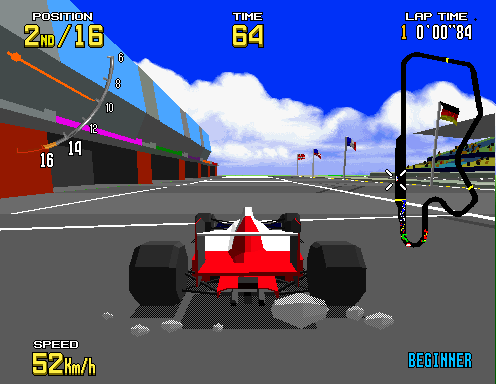 Virtua Racing is a Formula One-themed racing game in which players can race on one of three different tracks. Each track features timed checkpoints that must be reached within the time limit or the race is over. Each race consists of up to five laps with a field of 16 drivers. Players start a race in last place and must fight their way up the field.

Contact with barriers, trackside objects or rival drivers will result in a crash or, more usually, a spin-out, costing the player valuable seconds. Players can also spin-out if they stray off the track onto a low-traction surface (such as grass). Rival drivers will also try to ram the player's car.

Virtua Racing offers both manual and automatic transmission and enables players to switch between four different viewpoints on the fly. The game's three tracks are named 'Big Forest', 'Bay Bridge' and 'Acropolis' and each offers a different level of difficulty: beginner, intermediate and expert.