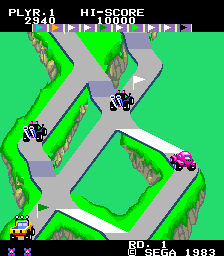 Up'n Down is an abstract racing game viewed in a forced third-person perspective.

The goal of the game is to collect coloured flags, while avoiding the enemy vehicles and obstacles that litter each course. The flags needed are displayed at the top of the screen and are coloured as follows: Light green, blue, red, olive, dark green, magenta, yellow and black. If the flags are collected quickly enough, bonus points are awarded. Collected flags remain visible on the track but are changed to white in colour.

In addition to the enemy vehicles, other hazards to be negotiated include potholes, broken bridges, steep hills and sharp corners. The player's vehicle can jump over both obstacles and vehicles, and if players land their vehicle on an enemy vehicle, the enemy is destroyed. Jumping at the wrong time, however, can send the player's vehicle into the path of an enemy, or off the track completely, resulting in the loss of a life. Players can also control the speed of their vehicle and even move in reverse.

Each round is progressively more difficult than the last, with more obstacles and enemy vehicles littering the courses. 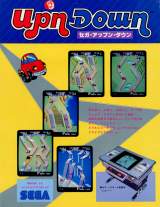