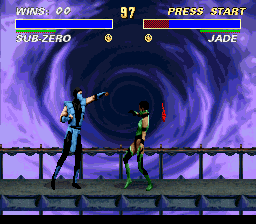 The fight of your life...

Enter the world of ULTIMATE Mortal Kombat 3 and discover what awaits you... 23 immediately playable Fighters and 2 Bosses including old adversaries with new combos, fatalities, brutalities & babalities. They're looking for you! Find a secret fighter hidden within the game if you can, battle against the computer, opt for 2-on-2 fighting or try out the very cool 8 Fighter Tournament mode! Features dazzling graphics, incredible sound and motion-capture technology produce the most realistic battles you'll ever fight!