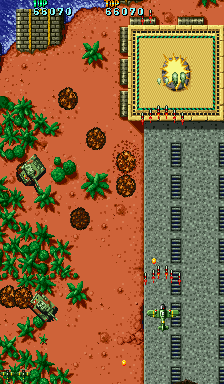 A vertically scrolling shoot'em up.

Developed by Toaplan. Even if developed by this famous shoot'em up company, Twin Hawk was not good game and it was a flop.

This game is known in Japan as "Dai Sen Puu".

There are several differences between Twin Hawk and its Japanese version "Dai Sen Puu" :
* Twin Hawk supports two simultaneous players.
* Dai Sen Puu supports two players, but only one at a time. Because of this, it also supports Cocktail cabinets.
* In Twin Hawk, both planes are purple and pink for player 1 and 2 respectively.
* In Dai Sen Puu, the planes are green for both players.
* In Twin Hawk, when you die, you continue the game at current position.
* In Dai Sen Puu, when you die, you continue the game at predefined positions. This makes the game much more difficult to complete.