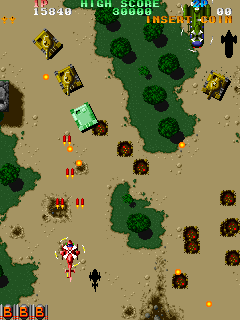 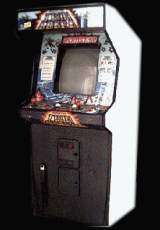 Developed by Toaplan. Twin Cobra was released in October 1987.

Differences between Twin Cobra (TC) and Kyukyoku Tiger (KT) :
* TC supports two simultaneous players.
* KT supports two players, but only one at a time. For this reason, it also supports Table Top cabinets.
* TC stores 3 characters for high scores.
* KT stores 6 characters for high scores.
* TC heros are Red and Blue for player 1 and 2 respectively.
* KT heros are grey for both players.
* TC dead remains of ground tanks are circular.
* KT dead remains of ground tanks always vary in shape.
* TC continues new hero and continued game at current position.
* KT continues new hero and continued game at predefined positions. After dying and your new hero appears, if you do not travel more than your helicopter length forward, you are penalised and moved back further when your next hero appears. Due to this difference in continue sequence, KT is MUCH harder, challenging and nearly impossible to complete !