Turkey Shoot - The Day They Took Over 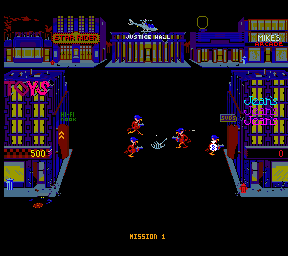 The year is 1989, one year after the great gobble blight which plagued the world. One-third of the earth's populace was transformed by the ailment. The side effect of the turkey transformation is a tendency toward violence and comradery between these turkeys to organize for rabble-rousing in the urban areas. In February of '89, a group of specially trained agents (the turkey terminators) was formed for the sole task of destroying the turkey menace...

And so it begins. As a Turkey Terminator, the player is given 100 missions and 3 weapons to eliminate all the turkeys, leaving no 'left-overs'. He can take aim with his lethal laser gun using the position dot on the screen Screen-shot to hone in on his enemies with deadly accuracy. He can launch a lit grenade to annihilate all the turkeys within range or he can activate his gobble button (available one time each mission) to freeze all the turkeys for an instant, making them 'sitting ducks'. Missions are varied and include reacting quickly to clever ploys such as turkey air raids, turkeys disguising themselves as businessmen and turkey helicopter get-aways. Every 8th round is a rapid-fire bonus wave where the player has 15 seconds to eliminate as many criminals as possible. Shooting fire hydrants and trash cans as well as freeing bystanders who have been taken hostage also score bonus points.

Three 'fowl-ups' are allowed and occur whenever any turkey... a Pilot Turkey, Boss Turkey, Cyborg Turkey or Thug Turkey... escapes or when an innocent bystander... a businessman, shopper or policeman... is damaged.