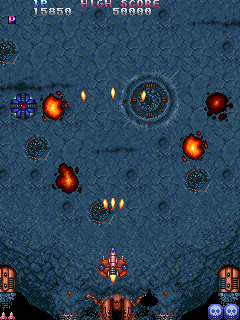 Taking place somewhere in the near future of space travel, an alien armada is invading the player's home planet aboard 5 gargantuan asteroids. After surviving an attack on the player's cargo barge, players board and pilot one remaining fighter and challenge the aliens in a desperate attempt to quell the alien invasion and divert their asteroid fortresses in the process.

Tatsujin was released in October 1988 in Japan.

The title of this game translates from Japanese as 'Master'.

This game is known outside Japan as Truxton.