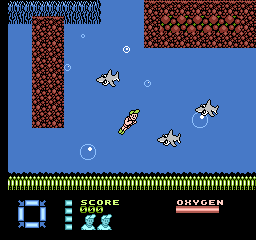 THE ULTIMATE COMPETITION FOR FANTASY PRIZES!

Scooter's dreams start where most games finish. After battling sharks, conquering space, surviving miniaturization, and getting lost in fantasy forest - our hero finds the treasure.

AND GETS TO KEEP IT!

It's up to you to guide him there and keep your share when the Treasure Master vault opens with the Secret Password on April 11, 1992 at noon EST until all the treasure is found, or 12 midnight EST April 11, 1992. You and Scooter will have to be in top training to get there first. It won't be easy with only 12 hours to find the treasure.

But all your practice and training won't be wasted because mastering 5 tough treasure worlds will prepare you for the ultimate quest for fantasy prizes right at home.