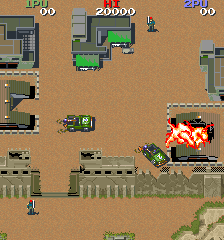 Tokushu Butai Jackal was released in October 1986 in Japan.

The title of this game translates from Japanese as 'Special Force Jackal'.

This game is known outside Japan as "Jackal" and in US as "Top Gunner".

In "Top Gunner", the jeep has an American flag flying next to the cannon and the sound effects are slightly different.

You get 10,000 points for every POW rescued after the eighth one. If your jeep gets destroyed, the progression starts over again.

The name of the game is POWERUPS. Your success in this game will depend solely on your ability to obtain and KEEP powerups. Your jeep is equipped with two weapons : a machine gun (always shoots up in TG) and a rocket type weapon that shoots the direction you are facing and can be 'boosted' in various ways and usually in steps or levels of powerup. The default level is short range rocket, which Will stop and destroy many buildings and all vehicles.

There are a couple of ways of boosting your rocket weapon. The assumed way is to blow up the special bunkers that have a single gun turret and a single POW - picking up the POW will give you a nice points bonus as well as a POWERUP to the next level of rocket weapon. These bunkers are available every so often - but you will need a little something extra to get further in the game. You need to get full powerup quickly - and this is how you do it. A diversion in the game (not required to actually finish it) is to shoot open bunkers and pick up POWs - this is above and beyond the single POW bunkers you can snag guys from. Your jeep can handle a total of 8 POWs. First trick - NEVER fill your jeep to capacity - always leave a single slot open. If you fill your jeep up and run across a single 'power up' bunker, you won't be able to pick the POW up and get your powerup. Now, just before you get to the helicopter pad (to release the POWs), you will almost ALWAYS find a bunker with a single powerup POW. Blow it up, get the POW, the powerup, and that will fill your jeep to capacity. YOU WANT YOUR JEEP FULL BEFORE STOPPING AT THE CHOPPER PAD. Clear the area of enemies around the pad (you don't want any surprise enemies popping up and making you move) then park and start releasing the POWs. DO NOT MOVE UNTIL THE LAST MAN IS AWAY. Once all eight are out of the jeep, you can get the heck out of there (chances are, you will being stalked or about to be killed) You will receive a great bonus of points and FULL POWERUP on your rocket weapon! Talk about tilting the odds in your favor! You can do this EACH and EVERY time you are at a helicopter pad! This will earn you HUGE scores and keep your weapon up to snuff.

Remember, every time you die, you lose ONE level of powerup - so aside from the understood incentive for staying alive, you want to also maintain your weapon. Best of all - YOU GET A HUGE BONUS for picking up the powerup POWs when you are at full rocket weapon strength. If you want to see your score skyrocket, get full powerup and start plucking those powerup POWs up. Later in the game, you will need to strategically stop on the helicopter pad to allow yourself to shoot up and to a left angle to shoot down bomber planes that will DEFINITELY start showing up. If you can kill them the second they appear on the screen, none of their bombs will hurt you. If you miss lining up the jeep right, or you miss the plane, you will HAVE to move before the last guy gets out of the jeep or die. It takes some practice (you can't 'reposition' the jeep after the first man gets out or you lose the bonus) but you'll get to be a pro in no time. Enemies are not random in this game, so you can learn where tanks and enemy jeep vehicles reside quite quickly. While it sounds like a 'duh' tip, keep the enemy count low - especially enemy soldiers on foot. While they are little more than an annoyance at the beginning of the game, they QUICKLY become formidable enemies and keeping the number of them 'on screen' to a minimum is a requirement. The enemy subs can be killed before they are all the way out of the water as well as while they are going back in (i.e. when they aren't firing). Learn their location and plant rockets in the water before they have a chance to fire on you. In a two player game, have the player NOT offloading POWs to the helicopter 'stand guard' against the bomber planes (and other enemies for that matter). Then swap off and let the other one offload. Enemies are still 'active' hidden partially off screen (but they don't move or fire). Use this to kill enemies before they take a stance against you (the big tanks especially). Most vehicles can be killed with enough shots from your machine gun. If you don't feel you can reposition yourself in time to line up your rocket, pound away with bullets and hope you kill him first.