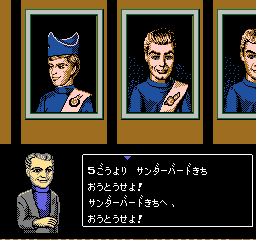 Thunderbirds is a vertical shooter published by Pack-In-Video and based on the classic 60's British TV show of the same name. In the 21st century, the ex-astronaut Jeff Tracy and his five sons create the private International Rescue organization. On board the highly advanced Thunderbids machines, their mission is to react to major crisis situations around the world. The Hood is the recurring antagonist of the series and is determined to steal the International Rescue's technology. The player controls the Thunderbirds and performs strike missions against the Hood - several destinations are always available at once and can be selected in any order. Each machine is equipped with a main upgradeable weapon - red ships scattered throughout the game release energy capsules when destroyed: (L) for extra life, (E) to upgrades the main weapon and (O) gives the ship an Orbital Device. Orbital Devices orbit near the ship and increase its firepower - special configuration devices must be collected throughout the game and they can be activated by pressing the second action button. The player has sixty days to stop the Hood and damaged ships take three days to repaired - so the game is also a fight against time.