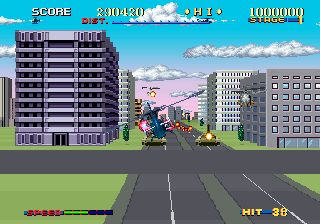 Taking control of a heavily-armed battle chopper, the player must battle through a variety of both overhead and 'into-the-screen' 3-D stages.

Each stage is packed with a mixture of enemy choppers, planes, tanks, boats and static gun emplacements, all intent on bringing Thunder Blade crashing to the ground.

The player's 'copter is armed with 2 different weapons; a rapid-fire machine gun and air-to-ground missiles - both of which have unlimited ammunition.

The first half of every stage begins with a top-down, vertically-scrolling section, before switching to an 'After Burner-esque', into-the-screen section.

Thunder Blade consists of four stages, which are as follows :
* Stage 1 : The game begins in a skyscraper-packed city. Enemies consist of rival choppers, jets, and ground-based tanks and gun emplacements. The level ends over the sea, with the player facing a huge and heavily-armed battleship.
* Stage 2 : This stage begins with the player navigating a desert canyon, before switching to the into-the-screen view and taking the player through a number of stalactite-packed and densely populated caves. A huge ground-based tank awaits the player at the end of the stage.
* Stage 3 : This begins in a river canyon, before moving on to a rain-forest river network. As well the the usual line-up of enemies, heavily-armed boats are introduced. the end-of-level battle takes place in the skies as the player attempts to destroy a massive jet fighter.
* Stage 4 : The 4th and final stage begins with a repeat of the first stage's city level, only this time the action takes place at night. The second half of this stage takes the player deep into an industrial complex, eventually leading to an end-of-game showdown with a massive and heavily-armed gun emplacement.