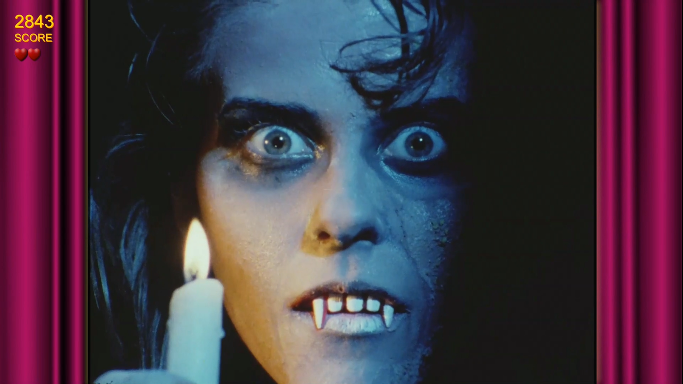 Become the star of an entertaining B-Movie horror film in The Spectre Files: Deathstalker. You take the role of Ed Spectre, a witty private eye who is in dire need of some cash. He takes up the case of a missing woman by the name of Buffy McGuffin, who disappeared while walking her chihuahua in a graveyard near the seemingly abandoned mental institute by the name of Derhachett Institute.

The gameplay is unusual for arcade games, even for laserdisc tech that it was originally based on. A clip will play, where at the end the player is presented with three choices. That choice will affect the others, either moving the story ahead with good choices, or hindering your efforts to solve the mystery with bad ones. While a player who makes nothing but poor choices can find themselves only playing for a few minutes, those who come back to play with different/better choices can go for quite a while on a single credit, even as long as 30-45 minutes.

The game features an entertaining sense of morbid humor, mixed with tongue-in-cheek fun and plenty of puns. Something of a hallmark with other games created by the designer, Brian F. Colin.