The Legend of Kage 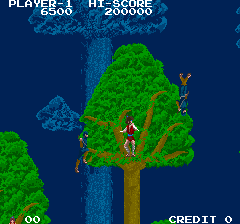 As a Ninja, defeat the evils from Devil's World and save the Princess.

At the end of the Edo Period (late 19th century) in Japan, a Corps formed by the evils, which had come back to life from the Devil's World, was terrifying people all over the country. One day the princess 'Kiri', a daughter of the lord, was kidnapped by the Corps. In order to save her from them, a number of militia were sent to the Corps' Headquarters, but none of them ever returned. Then one young man headed for the Corps' Headquarters to save the princess. His name 'Kage', a ninja from Iga Village.