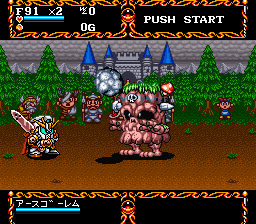 Our four favorite champions are back in this side-scrolling beat'm up by Banpresto - Ultraman, Gundam, Kamen Rider and Fighter Roa are back and ready to save the world. Our friends were peacefully flying their spaceship when a meteor appeared from nowhere and hit them. They make a desperate landing on a weird planet from another time. Unlike other games of the series, this third opus happens during medieval times and our heroes have traded their usual laser guns and plasma bombs for more traditional swords and spears. All the enemies also have a medieval feel to them and our heroes will often fight knights, dragons, wizards and giant bats. This time around, the player can also switch from any of the four characters and each one of them have his own weapon : Gundam uses a sword, Ultraman a morning-star, Kamen Rider a spear and Fighter Roa a bow. A two simultaneous player mode is also available.