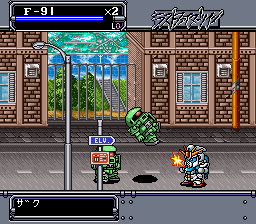 Great Battle 2 is a beat'em up by Banpresto and features 'Super Deformed' versions of Ultraman, Gundam, Kamen Rider and Fighter Roa. Once again, Earth is facing certain doom and a group of super-heroes decides to save the world. The player must first pick up a team of two characters and both will be available to play. They can simply be switched from one to the other at any time during the game - they however share the same life-bar and special attacks points. Each character can punch, kick, jump and even use special powers or charge-up fireballs. Fortunately, our heroes can also pick-up weapons and use them to strike their opponents down from afar. Orbs can be collected along the way to unleash special attacks usually consisting of screen-wide blasts o f energy (each character has its own set of spectacular attacks). In a way similar to Sega's Golden Axe, three levels of special attacks are available and the more powerful they are, the more orbs our heroes will use. A two-player mode is available where players use two characters each.