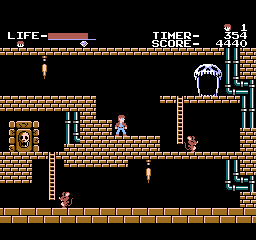 A platform game based on the 1985 Steven Spielberg movie of the same name. The player takes control of Mikey and must explore a variety of caverns and rooms, searching for the three keys needed to unlock the huge, metal door that bars progress to the next level. The keys are hidden behind a number of doors which can only be removed by placing a bomb in front of them and blowing them open. Mikey's progress is hampered by the many enemies that roam the levels. The bombs needed to blow the doors appear when certain enemies are killed.

A fellow 'Goonie' is trapped behind one of the doors on each level, and can be rescued, although this isn't necessary to progress to the next level. A catapult, or 'slingshot', can also be found, allowing Mikey to attack enemies from a safe distance.