Daggerfall is the second chapter in the award-winning computer role playing series, The Elder Scrolls and surpasses the standard set by the first chapter, The Elder Scrolls: Arena. Set in the unique world of Tamriel, Daggerfall takes you on a special mission on behalf of the Emperor to quell a potential uprising in the royal court of Daggerfall. The player's participation in this major quest is not required: as in Arena, the player may choose to follow any path or career in the vast, beautiful, and dangerous world. If the player chooses to investigate the court of Daggerfall, stories of madness, unrequited love, dark sorcery, seduction, betrayal, and a plot to recreate a powerful force from thousands of years past will be revealed. It will be up to the player to help the side that should wield such a power, for the fate of Daggerfall and the Empire of Tamriel hang in the balance. 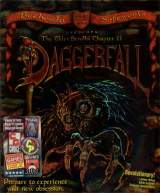