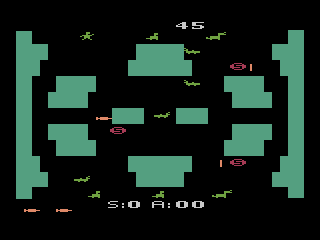 You play the role of Jane Marvin who must save her husband and his friends who are turning into Alligator People due to a failed medical treatment. Jane (who just happens to look like a syringe) must shoot each person on the top and bottom of the screen with special Alligator antidote (no I'm not making this up!) until they are cured. Of course the alligators aren't just going to let Jane wander about curing people unmolested, otherwise it wouldn't be much of a game now would it? Jane must avoid roving alligators and moving walls whiles collecting vials of antidote and serum.