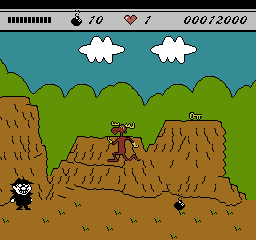 The Adventures of Rocky and Bullwinkle and Friends © 1992 THQ

Moose on the Loose or Squirrely Heroes! An all-new episode in Bullwinkle's life when he finds out he's the Lost Earl of Moosechester!

He and his pal, Rocket J. Squirrel must get from Frostbite Falls, Minnesota to the Abombinable Manor in England in order for him to collect his inheritence. Problem is, those two no-Goodniks, Boris Badenov and Natasha Fatale are after the same fortune.

As Bullwinkle, you'll lock antlers with all sorts of dastardly enemies while avoiding Boris and Natasha's bombastic attacks. Or, as Rocky the Flying Squirrel, you'll soar into action against villains armed with goof-gas. Are you Moose enough for this challenge? Stay tuned!

Do powerful headbutts as a rampaging moose! Dive-bomb the bad guys in classic squirrel fashion! Switch from Bullwinkle to Rocky instantly - whatever the situation needs!

Released in December 1992 in the USA.