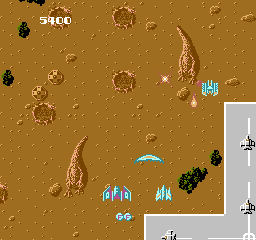 Terra Cresta is a vertical shooter by Nihon Bussan and conversion of the arcade game of the same name originally released in 1985. The game is set centuries in the future, when Earth is engaged in a fierce war and controlled by the evil Mandor? military dictatorship. Every piece of land on the planet has been colonized by the violent invader and humanity is now forced to move into the oceans in order to survive. But members of a rebel action group called 'Terra Cresta' think otherwise and decide to confront Mandor?'s army in a desperate attempt to recapture the Earth. The player controls a lone spaceship armed with a basic (yet effective) twin laser. However, special modules can be collected throughout the game to add tremendous power to the ship. Each part increases the ship's combat abilities, from quad lasers (2), tail guns (3) to energy blasts (4) and a defensive tail force field (5). There is a total of five different modules (including the initial ship), and although they can all be attached to the ship at once and dramatically increase its firepower, they also give it a larger surface area and make it more vulnerable to enemy fire. However, modules do absorb enemy shots, but this comes at a price and they are themselves destroyed in the process. Additionally, if the player manages to collect all five modules, then the ship turns into a devastating and blazing Phoenix for a short amount of time, melting through anything on its path. Finally, collected modules can be broken out into special attack formations for a short amount of time. These attacks come in limited quantities though, and are symbolized by a series of F icons located at the bottom of the screen. Beside, the formation attacks can be edited in the option menu, and a special 'design' section enables the player to edit the formation's layout. The game is single-player only and consists of four looping areas.