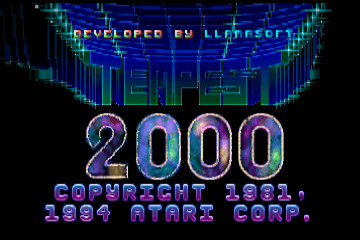 Back in 1981 Tempest introduced the gaming world to an extra-sensory visual and futuristic play experience that went beyond any video game concept ever developed. With never-before-seen QuadraScan Color video graphics, Tempest set new standards for 3-D animation and challenge, and became the first arcade game to be a guaranteed hit.

Ride the rim and unleash your SuperZapper on crafty Flippers and Fuseballs in Traditional Tempest. Team up with a friend, or an A.I. Droid, and light up the webs against pesky Spikers and Pulsars in Tempest Plus. Venture through 100 uncharted galaxies filled with hostile Demon Heads and Warp Bonus Tokens in Tempest 2000. Then use your Mirror and go Blaster-to-Blaster against the most formidable alien of them all - your best buddy - in Tempest Duel.