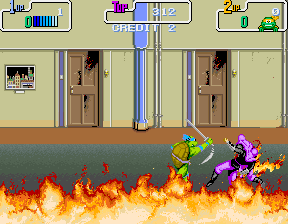 Teenage Mutant Hero Turtles was released in October 1989 in the UK.

The UK title for this game (as well as both the comics and cartoon series), "Teenage Mutant Hero Turtles", replaced the original 'ninja' of the title with the less threatening 'Hero'. This is because the Conservative British government of the time wouldn't allow ANY 'children's product' to include the word 'ninja' at any point during its content, arguing that to do so would encourage the children of this fine country to use violence against each other.