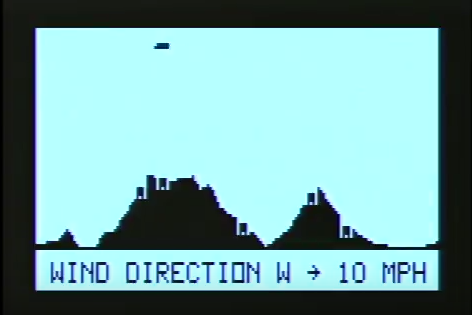 BOMBARDIER:
Imagine yourself flying over a mountainous area in a bomber. This area is the base for numerous Russian missile silos. In your hand, you control the release pin of a very powerful bomb, all you have to do is to squeeze the trigger.

Wait! Don't fire yet! Check the wind direction and speed. Now, when you are over one of the Russian missile silos and have allowed for wind direction and speed, fire away. You will be allowed to make ten passes over the area, firing one time on each pass. On each pass you may find the wind direction, speed or both have changed. See if you can eliminate all of the Russian silos. Remember to wear your 'Flak Jacket' because the Russians will be firing back. Two levels are alvailable for those of you who become good with level 1.

With level 2 the wind speed will pick up and those nasty Russians do a lot more firing. Each new game finds you flying over a different group of mountains, with the missile silos in different locations.

METEOROID:
This game is similar to Bally's Space Fortress game, but it has two bases instead of one.