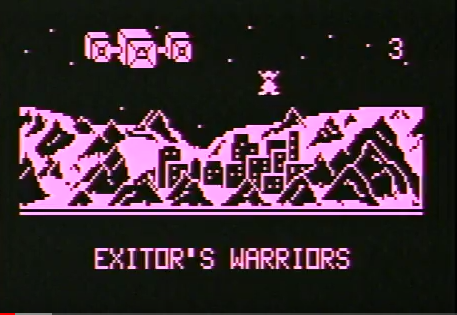 Exitor's Revenge
You are the commander of the underground MX missile, defense for the top secret facility, which is code named Akreon. This is where our first interstellar star drive is being constructed. You are alerted to the presence of an object coming in from outer space. You immediately recognize it as a battle star of alien origin. You take control of the MX system, positioning the launcher, firing the missiles and guiding them to target, destroying the warriors before they can radio important data to the enemy battle star. Look out! The battle star will fire back.

The Mummy's Treasure
Do you like treasure hunts? There are three levels, 180 rooms in total. Can you find the secret passages which lead to the dungeon, then find the treasure room before the mummy finds you? Or will you be carried to a different level by a mysterious force? Each replay is different and exciting!