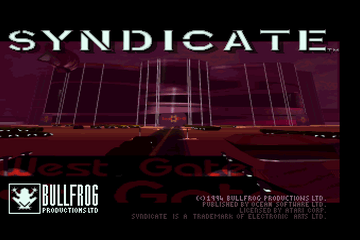 Three behemoth corporations: U.S.-based, European-based, and Far Eastern-based emerged as the most powerful entities in the world, controlling the highest level of government and trade. Then the European corporation created the CHIP, a mind altering stimulant that replaced all other drugs. Control of the CHIP meant control of the people. Soon the corporations were at war among themselves for control of this CHIP. Meanwhile, crime Syndicates bribed and murdered their way into these mega-corporations and soon exercised influence all over the globe.

As a young executive in a small Syndicate, your objective is to gain control of the world's territories. By battling rival Syndicates with CHIP-controlled Cyborg Agents, you'll embark on over 50 bloody missions, assassinating key figures and capturing rival Agents for your own use along the way. It won't be easy. You'll need to develop an overall strategy of attack for world domination-aimless killing and maiming will only get you so far.

Remember to keep a watchful eye out because you never know when the cross-hairs of a high-powered rifle will be pointed at you.