Portage of the Amiga game.

While the gameplay mechanic is very similar to the Amiga version, there are several differences. First, enemies attack from both directions, instead of the single direction in the Amiga game. Second, the player relies more regularly on potions, which are also dropped more frequently and can combined to achieve different effects. Third, the areas have been reduced from eleven to eight, with some completely deleted (e.g. the forest), while others combined. Finally, there are only eight enemies, as opposed to the thirteen in the Amiga game, however, the enemies are spawned more frequently, and in different areas. 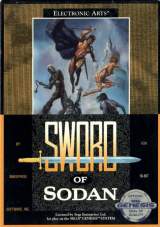