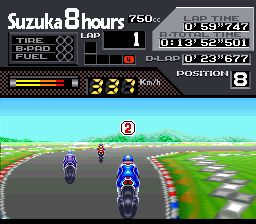 Suzuka 8 Hours is a bike racing game by Namco and based on the arcade game of the same name (and itself based on the popular Suzuka race in Japan). The player takes control of a superbike, and the goal of the game is to complete as many laps as possible during a given time limit. Races range from 15 minutes to 8 hours (which the actual real length of the Suzuka race!). Thankfully, the game doesn't use real minutes and the longest race won't last more than half an hour, which is still a challenge. Four tracks are available to test the players's driving skills, each one progressively more difficult than the last. The first ones are designed for high speed racing and they rapidly become more intricate with sharp curves and narrow turns. Thanks to a complete selection menu, several bikes can be chosen from (250cc, 400cc & 750cc) and various setups that greatly balance out automatic and manual features. A two simultaneous players mode is also available.