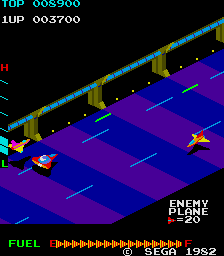 Super Zaxxon is a 1- or 2-player video game that presents the player with tremendous challenge and excitement never before experienced. The 3-dimensional-like, isometric graphics are produced by projecting the picture at a slant on the screen, putting the player in remote controlled realism with his player ship.

The player ship climbs, dives and strafes to maneuver through the many obstacles it encounters in its flight. In unique game play action, the player ship appears larger or smaller depending on its altitude, casts trailing shadow that follows it just as a real shadow would. This shadow, an altimeter on the video screen, and the points of impact of the player's gunfire, help judge the altitude of the player's space craft, lending new skill and challenge to Super Zaxxon.

Once through the fortress, Super Zaxxon lures the player ship into a foreboding tunnel where the player must use cautious skill and a responsive extra-heavy duty fighter pilot control stick to overcome the limited ceiling in the tunnel and dodge or destroy a terrific onslaught of flying minelayers, enemy ships and self-destructing robot spaceships, yet also avoid the indestructible mines that crowd the dim corridor.

Accompanied by the roar of space wind, the player soars out of the tunnel to face another battle within the enemy headquarters. This is a more heavily defended floating fortress of tighter passageways armed with maser barriers and increasingly heavier firepower from enemy defenses. Overcoming all this, the player is ready to face the ultimate challenge within the enemy headquarters - a bigger-than-life, fire breathing Dragon who can destroy the player ship with a single breath of fire. With an unnerving wail, the fierce Dragon flies forward and unleashes a breath of flame from its huge mouth. But by firing six direct hits on the Dragon's mouth, the player can defeat the Dragon. The game ends with the loss of the last player ship.