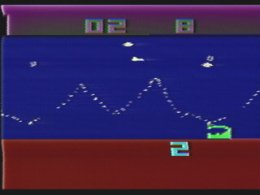 A game similar to Defender. The player controls a spacecraft and can fly either left or right in a scrolling environment. Zylon spacecraft need to be shot down and energy stations defended. Indicators at the bottom of the screen show which energy station is currently under attack. When taking damage from enemy projectiles the ship's shields will deplete. Shields can be recharged in special stations. While recharging the player can fire homing missiles. When playing with two players one of the players controls the Zylons.