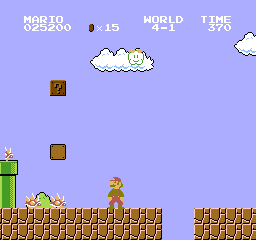 The player takes the role of Mario, or in the case of a 2nd player, Mario's brother Luigi. The ultimate object is to race through the Mushroom Kingdom, eliminate Bowser's forces, and save Princess Toadstool. The game consists of 8 worlds with 4 sub-worlds, or levels, in each.