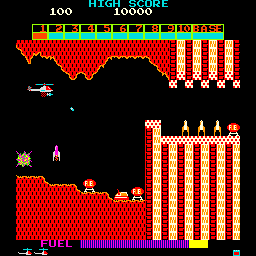 The object of the game is to invade ten SUPER COBRA defense systems of increasing difficulty and safely pick up the BOOTY.

Use the joystick to move up, down, accelerate and decelerate. Use the Laser and Bombs to destroy defenders. Hitting tanks scores Mystery Value worth 100, 200, or 300 points. Rockets, Tanks, Missiles, and UFO's may all fire at invader. Hit fuel tanks for extra fuel for CHOPPER. The Chopper uses up fuel as it flies, except in between defense levels.

At 10000 points, the player is awarded a BONUS CHOPPER.

At the end of the game, the player can continue at the defense level he left off on by depositing extra coins and pressing the discharge button on the left-hand side of the panel.

If the Booty is destroyed on the BASE level, the player may try again. When the Booty is safely recovered, a Bonus Chopper is awarded and play resumes at defense level Number 1 where the fuel is used up faster and the defenders fire more often. 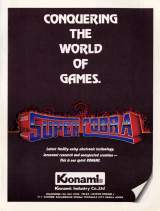