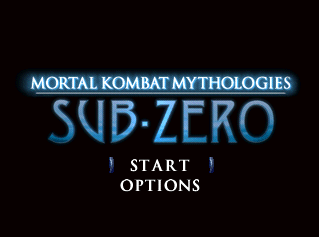 From the distant past of gods and warriors comes the epic quest that is Mortal Kombat Mythologies: Sub-Zero. Follow the adventures of Sub-Zero, a young warrior raised in the desolate expanses of north Asia. Schooled by his father in hand-to-hand combat and other forbidden arts, Sub-Zero is commanded by his masters of the Lin Kuei clan to journey to the heart of China. Here, protected by the majestic Shaolin Temples, lies the sacred Map of Elements. Sub-Zero's mission: to steal they mystic map and return it to the Lin Kuei.

Across the Japanese sea the Ninja, sworn enemies of the Lin Kuei, watches and waits. At last, the time is ripe. The masters of Shirai Ryu -- the most ancient and feared Ninja clan -- summon forth a young warrior named Hanjo Hasashi, better known as Scorpion. He, too, is to journey to the Shaolin Temples and plunder the Map of the Elements.

Mortal Kombat Mythologies takes the bone-crunching action and graphic realism you've come to expect in every MK title and adds all-new elements of adventure and suspense. Diehards will welcome back the classic MK fighting system, complete with a combo meter and the ability to gain dazzling new moves as you rout rival kombatants and gain experience. But MK creator John Tobias has also packed the game with plenty of power-ups, hazards, traps and branching routes.

The guardians of the Shaolin Temple have laid many diabolical traps for those who would seize the sacred map. Sub-Zero will have to elude plunging pillars, swinging battle axes and gigantic crevices that open up beneath his feet. The action ranges from gloomy caverns to opulent palaces to a shattered bridge high above earth. Fortunately, herbal potions and mystical formulas restore his health, ancient inscriptions provide valuable advice, and keys open up locked rooms.

Mortal Kombat Mythologies is the first 128-megabit game for the N64. All that extra memory is used to store high-quality graphics, including fully digitized actors, atmospheric use of light-sourcing and deftly MIP-mapped backgrounds.