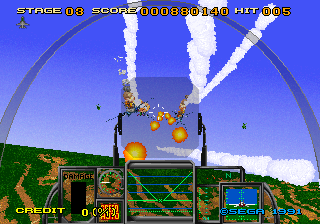 A single player sprite-scaled shoot-em-up in which the player takes the seat of an F-14 flight combat simulator with a view to shooting down swathes of enemy planes, avoiding incoming gunfire and missiles.